DAFFY, DONALD, AND ME

Maybe it’s an accident of birth, or maybe it’s embedded in my DNA, but every so often, a powerful Roast Duck Jones comes upon me, and there is nothing that will satisfy it save a Wretchedly Excessive Dinner Involving Roast Duck. And this was a weekend when the Duck Jones would not be denied.

My mother was enjoying a roast duck when she was first struck by the labor pains that heralded the birth of Yours Truly - at least, so the story goes. That might explain the mystic attraction I feel when I go to Harry’s Farmer’s Market (a division of Whole Paycheck Foods) and see the row of fresh ducklings in the meat case. It’s an attraction, incidentally, that She Who Must Be Obeyed does not share with me: under no circumstances whatsoever will she eat any bird that (1) is all dark meat, and (2) is not either a chicken or a turkey. Good, say I. More for me.

One of my kindred spirits - Stefan, a fellow member of the Minyan Boyz - also appreciates a good Roast Duck, and is a wine enthusiast besides. So it was inevitable that we should join forces to create the finest Roast Duck Dinner in recent memory.

My starting point was Karen’s fine recipe for The Ultimate Roast Duck. This is not a last-minute project: it takes every bit of five hours of oven time. But at the end of that five hours you have a gorgeous, crispy-skinned, tender-fleshed duck, along with about a cup of golden duck schmaltz that you can use for other projects. The trick is to use a slow (300°F) oven and to keep flipping the duck over every hour, each time draining off the grease and making little slits in the skin. During the last hour, you jack the oven temp up to 350° in order to brown the skin.

But I have my own little tweaks to Karen’s recipe. Rather than use a nondescript chicken stock for the sauce, I took the duck giblets (absent the liver, of which there was, sadly, the merest smidgen) and simmered them with carrots, onion, celery, a few parsley stems, a garlic clove, a sprig of fresh thyme, a bay leaf, and a few whole peppercorns to make a nice, aromatic duck stock. This was used to deglaze the roasting pan. After adding a little cornstarch to thicken things up a bit, I dumped the whole mess into a separate pan in which a gastrique (vinegar and sugar, cooked down until light brown) had been simmering. Now in went the juice from a couple of blood oranges and a liberal splash of Cointreau, and Bingo! - a perfectly workmanlike Sauce Bigarade.

Bottom line, it’s a big time investment, but worth it. 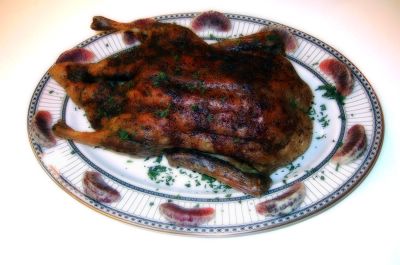 To keep Mr. Duck company, I trimmed and halved a bunch of Brussels sprouts (or, as they call them in Brussels, “sprouts”), blanched them, and sautéed them in butter. By way of a starch, we had a mixture of small red, purple, and Yukon Gold potatoes, halved and roasted in their skins along with a handful of garlic cloves in their skins, a sprig of fresh rosemary, and a coating of olive oil. [Plus a few teaspoons of the secret ingredient; Duck Schmaltz!] She Who Must Be Obeyed whipped up a killer mesclun salad with artichoke hearts and hearts of palm, and fixed some sugar snap peas for those (like her) who loathe Brussels sprouts. And since SWMBO loathes duck as well, she grilled a pile of Thai chicken sausage in order that she might enjoy some protein along with the rest of us.

As good as all this may sound, what really made the dinner special was the assortment of Great Wines Stefan and Pam brought with them. 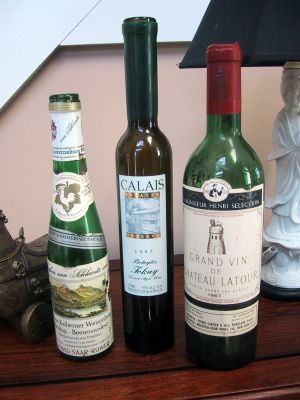 An evening of great wines.

To whet the appetite, we started off with a 2000 Hardys Crest, an Australian blend of Cabernet, Shiraz, and Merlot. Tasty.

As Mr. Duck made his appearance in all his dismembered glory, out came the 1967 Château Latour, an old first-growth Pauillac that, as it turned out, had held up quite well. Nothing - nothing! - says Red Wine Aroma quite like an old Bordeaux, and this one was no disappointment.

After we had demolished the duck and the other miscellaneous Dinner Goodies, it was time for some cheese, and in keeping with our Bizarro International Night theme, we had Spanish cheese and German wine. Mahon. Manchego. A few slices of membrillo (a Spanish quince-lemon paste). These were washed down with a 1976 Koberner Weisenberg Riesling Beerenauslese, a wine that could have been past its prime...but was surprisingly good. And when we had killed that bottle, out came the 1997 Calais Botrytis Tokay, a honey of a dessert wine from Australia, redolent of apricots and almonds.

Coffee and a few Belgian chocolate cookies finished off the meal. After all that wine, there was no speck of room left for Cognac. Oh, well.

Stefan is an interesting guy. He’s retired military - an MP, no less! - and one of the little jobs he had “back in the day” was to figure out how to get Ferdinand Marcos out of the Philippines when his dictatorship-cum-kleptocracy imploded back in the 1980’s. Along with five other Marines, he worked up a plan to get the larcenous bastard out before his countrymen had a chance to string him up à la Mussolini, or perhaps shoot him à la Ceaucescu. And it worked. Marcos flew on one plane; two others were needed to carry all of the money and other miscellaneous swag...including, perhaps, some of wife Imelda’s shoes. Sweet.

And it was in the military that Stefan learned to appreciate fine wine, even as others were (I suspect) learning to appreciate fine weed. In his current line of work, his business manufactures and sells electronic equipment to various international military and police organizations, so he’s always traveling to one exotic port of call or another. Replenishing his stock of unusual Australian wines is never a problem.

But those old Bordeaux vintages...those will not see the light of day again, except that you pay a boatload of money. Wotta meal!