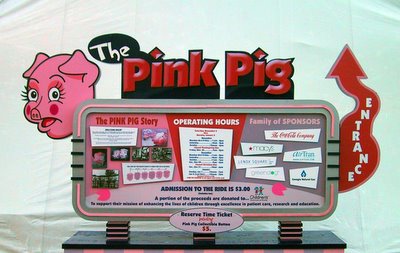 Going Hog Wild at the Mall.

I’m at the Apple store at Lenox Square Mall in Buckhead - the heart of Snazzy Atlanta. The machine? A dual-processor, 2.5 GHz Power Mac G5, with a honkin’ gigundo 30-inch Cinema HD Display. If I had a spare five large rattling around in my pocket, I could take this bad boy home.

Back in my Snot-Nose Days, it was model cars and chemistry sets. The toys have gone majorly upscale since then...and this one has enough raw computational power to have coordinated the Apollo moonshot. Yowza.

It’s got a cute little webcam attached to the top of the monitor. Dang - when you have one of these, it’s no longer necessary to use the office Xerox machine to photocopy your butt-cheeks - you can liveblog ’em!

I’d get one of these, if I could...if only to get Morris William, a confirmed Mac Die-Hard, to shut the fuck up about how wonderful they are. Yeah, OK, Morry - they are wonderful. Bite me.

Our main reason for going to Lenox Square was to give our nephew William a chance to ride the famous Pink Pig, a holiday-season institution here since 1953. Originally an attraction at the Rich’s Department Store downtown, the Pig has moved out to Lenox, where it is now associated with Rich’s corporate successor, the all-too-ubiquitous Macy’s. 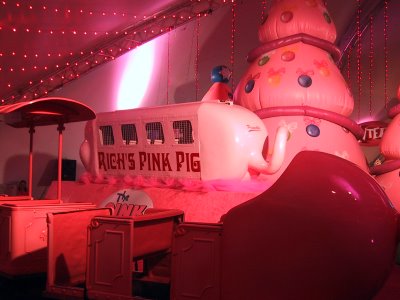 William, as expected, had a blast riding the Pig, which is best described as a Kiddie Railway in the shape of a Giant Mutated Sow. The only hard part was explaining to him that he could not ride the Pink Pig continuously until the Sun expands, engulfing the Earth and becoming a white dwarf star. Kid, life is full of little disappointments like that; get used to it.

[Rabbinic note: It’s OK to ride on pig-shaped conveyances, as long as eating the flesh of an actual pig is not involved. And that, friends, would be perverse.]

After leaving the Apple store, we wandered around a bit, ending up in Anthropologie. Anthropologie is one of those fancy-pants clothing-and-tchotschke shoppes in which Vagino-Americans of all stripes enjoy pissing money away. Elder Daughter and the Mistress of Sarcasm were busily inspecting the wares there, while Khody (Elder Daughter’s Main Squeeze), Morris William, and I tried to keep each other amused by making Snarky Observations on the mall’s clientele and speculating on how rapidly our continued presence in Anthropologie would drain our testosterone reserves. We figured anything over 35 minutes and our dicks would be in danger of shrivelling up and dropping off.

Eventually, Khody and Morris William wen’ bag - no doubt getting antsy about that 35-minute limit - leaving me to take an impromptu snooze in a rock-hard chair. 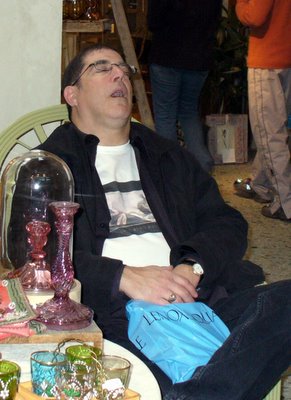 An impromptu snooze. Is that a stream of drool?

Damn, but I love these Mall Expeditions.
Posted by Elisson at 3:44 PM