It’s Christmas morning, as good a time as any to extend my best wishes for a Merry Christmas to my Esteemed Readers of the Christian persuasion.

TBS, as recent custom dictates, is showing A Christmas Story around the clock. Like other Christmas-themed movies, A Christmas Story has entered the American Holiday Movie Canon, along with other seasonal films such as It’s A Wonderful Life, Miracle on 34th Street, et alia. That has special meaning for me - not because I am a particular fan of Things Christmassy, but because I have been an admirer of long standing of the works of Jean Shepherd.

Shepherd was one of the three credited screenwriters for A Christmas Story, and it is his “novel” In God We Trust, All Others Pay Cash that forms the basis for the film’s storyline. I say “novel” in quotation marks because In God We Trust... is more of an assemblage of short stories than a novel per se. And those of us who used to listen to Shep’s nightly broadcasts on WOR back in the late 1960’s were already familiar with many of those stories.

The Red Ryder BB gun story...and the scene at the Department Store Santa.

The fight with Scut Farkas and Grover Dill.

Flick sticking his tongue to the flagpole.

The invasion of the Bumpus Hounds. [Originally published as a short story in Playboy Magazine.]

It’s Shep’s voice you hear providing the narration, and during the Santa scene he does a brief cameo as the guy who tells Ralphie, “The line ENDS here. It begins THERE” as he points to the very end of a very long queue.

Back in 1970, my friend Walter and I attended a press conference Shepherd gave at the Overseas Press Club in New York. Walter is the guy who had turned me on to Shep’s radio show, and there was no way we were going to miss a chance to meet a guy who, even then, was a sort of Cultural Icon.

Here’s the letter we got from Shepherd - our Official Credentials, as it were. [Click to embiggen.] 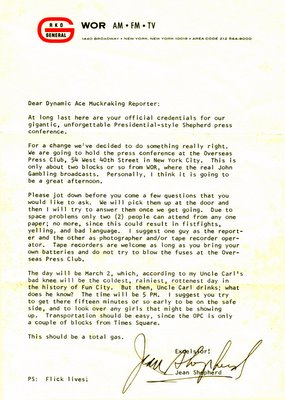 Complete with a real, honest-to-Gawd autograph from the guy who later wrote A Christmas Story:

Flick lives! Yes indeedy.
Posted by Elisson at 10:39 AM