In life, you dodge some bullets; others find their target. All you can do is keep your cross-section as low as possible and hope that the ones that strike home are the ones that are not aimed at the vitals.

Friday evening, She Who Must Be Obeyed and I went down to Vinings and met the other local employees of the Great Corporate Salt Mine for our annual Christmas party. Yes, Christmas party. I mean, who are we kidding? Of the forty or so people there, there were three Jews (if you counted our Veep of Sales, visiting from Houston) and one Hindu. So, yes, it was a Christmas party.

Unlike past iterations, this party was bittersweet, it being the Last of Its Kind. The local outpost of the Great Corporate Salt Mine was shut down last week, with the employees dispersed to their various residences, there to set up Home-Based Offices. 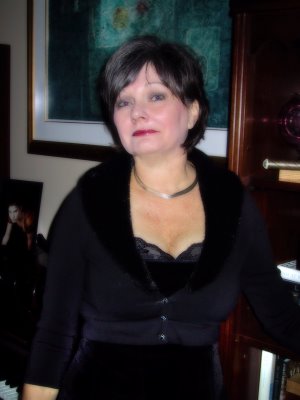 She Who Must Be Obeyed was dressed to the nines. I can’t recall a time when she looked more gorgeous.

We sat at the end of a long table, SWMBO and I, along with Irish Tommy (he of the Leg that Pissed Blood) and his wife Ellen, and Fresh Meat and his wife Danae. The ladies sat, conspiratorially, next to one another.

Fresh Meat, in case you were curious, is one of the younger members of our Sales team, and the most recent transferee to Atlanta. Given that he is so young and full of Annoying Peppiness, I bestowed his Official Salt Mine Moniker upon him two years ago; he has since borne it with both pride and bemusement. His Better Half, Danae, is a slender, blonde beauty who has, in the past, modeled in Europe and worked as Gwyneth Paltrow’s body double on several of her films. If I were a more cynical sort, I could hate them…

We were having a grand old time, when Irish Tommy – who, atypically for an Emerald Isle guy, tends to talk with his hands – knocked over a full glass of red wine. I was directly in the line of fire, and that Big Purple Bullet found me. To be precise, it found my Vitaliano Pancaldi soup magnet necktie, a necktie that had survived ten years without so much as a gravy stain – and my freshly laundered white shirt. I looked like Dillinger at the Biograph.

Poor Tommy was beside himself. He was so guilt-ridden, you could have mistaken him for one of us Jews. I insisted that my wine-saturated shirt was no big deal and that the dry cleaner could remove the stain – in any event, I did not want Tommy’s evening ruined over his excessive remorse.

A shirt, after all, is just a shirt. It’s no Big Honkin’ Deal.

For I could not help but remember that, earlier the same day, I had gotten a phone call from our friend JoAnn. It was one of those phone calls that starts out with, “Just so you know, everybody’s okay.” Whenever you hear an opening line like that, look out. Invariably, the next sentence tells of some near disaster, and this was no exception.

JoAnn’s daughter Jennifer, a student at UGA, had been driving around in Athens early that morning with several friends when they hit a patch of black ice on an overpass. Her SUV rolled, flipping four times and coming to a dead halt with virtually no glass left intact, completely demolished. Miraculously, no one was hurt save for a few minor cuts and scrapes. Jennifer and her friends had dodged a bullet, but this was a fifty-millimeter round aimed directly at their vitals, compared with the dinky-ass BB that found me.

JoAnn and Gary drove out to Athens in the dead of night to pick Jennifer and her friends up from the hospital and take them back to their several homes in Atlanta. They were shaken, not so much by what had happened, but what could have happened – but which did not, thank God.

In life, you dodge some bullets; others find their target. While mine scored a direct hit, I’m grateful that Jennifer dodged hers.
Posted by Elisson at 1:01 PM