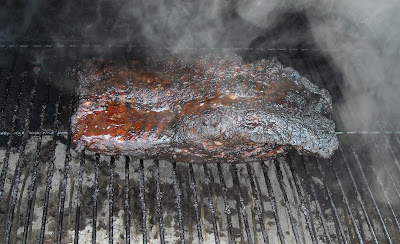 Outside the cabin, smoking some meat.

“I was outside the cabin, smoking some meat. There wasn’t a cigar store in the neighborhood!” - Groucho Marx as Captain Jeffrey T. Spaulding, in Animal Crackers

I was outside on the patio, smoking a Cohiba Esplendido. Havana. There may not have been a cigar store in the neighborhood, but no matter. One of Morris William’s friends had smuggled a few of these bad boys in on a recent trip, and he had set one aside for me.

As I smoked my cigar, I kept a weather eye on the humongous chunk of beef brisket sitting in the smoker out back. It was getting close to being ready. Just an hour or so more...

We had found whole briskets on sale at Super Target a few days prior, down in Foat Wuth. As we looked at each other, then at the meat, a single Idea-Based Light Bulb appeared in the air above our heads. Barbecued beef brisket! It was the kind of thing Billie Bob, my late father-in-law, would have endorsed wholeheartedly as a Family Gathering Dinner Entrée. Morris William grabbed one, and we eventually managed to wrestle it into his kitchen.

Yesterday, I trimmed some (not all) of the fat off of the enormous Beef-Chunk. You want some fat; it keeps the meat moist as it slowly cooks over hot smoke. But a whole brisket has a lot of fat. You don’t need it all.

I seasoned the trimmed-up (but still enormous) brisket with an improvised rub, using the ingredients on hand in an approximation of Billie Bob’s classic blend. It sat all night, tightly wrapped, in the bottom of Morris William’s fridge, awaiting its day-long exposure to hot charcoal and mesquite smoke - an exposure that began at about seven o’clock this morning.

Morris William kept the firebox (the smaller compartment on the left in the photo below) stoked with charcoal and big chunks of water-soaked mesquite wood, filling the entire neighborhood with fragrant smoke. Some folks prefer to use hickory, or a hickory-mesquite blend (in the style of Billie Bob hizzownself), but the pure mesquite turned out just fine this time. 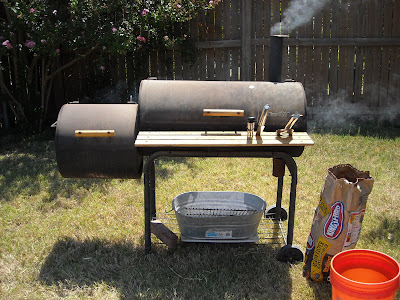 After nine hours, the meat was ready to come off. In the meantime, we had prepared a small pile of cheese-stuffed jalapeños...the hottest damn jalapeños I’d had in years. Just sitting in the kitchen, they were giving everyone violent coughing fits. Smoking them did little to tame their incendiary heat.

The metal jalapeño holder is a device I first saw at Laurence Simon’s place. A useful kitchen gadget if you like to roast your innards with mass quantities of capsaicin. 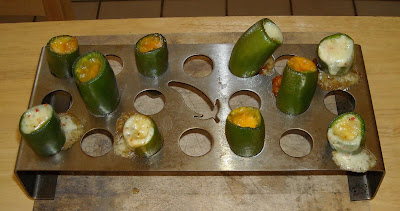 Stuffed Jalapeños...hotter than the hubs of hell, as they say here in Texas.

The Mistress fixed up a bowl of guacamole, picking up tips and hints from the Guacamole Queen herself - She Who Must Be Obeyed. The results were espetacular. 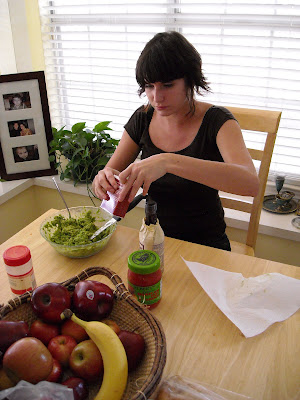 Morris William had heated up some barbecue sauce to serve alongside the meat. Texans do not apply the sauce while the meat is cooking, preferring to slop some on to meat that has already been sliced or chopped. To jack things up even more, we had an assortment of Tabasco products...including a fiery habanero pepper sauce. Morris William do love his Tabasco. 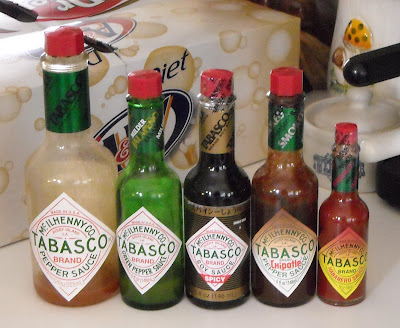 An assortment of Tabasco sauces.

With the meal laid out and the finished brisket resting happily on a cutting board, I began carving slices. The deep red smoke ring - and the tender meat - together furnished evidence that we had created a Meaty Meal any Texan would be proud to eat. Better: a meal Billie Bob himself would have been proud to eat. 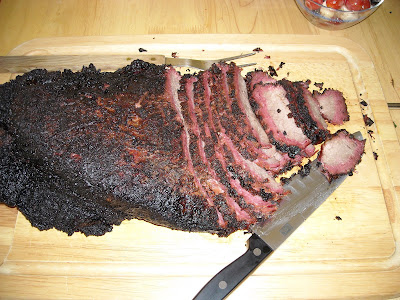 We begin our return trip to Atlanta at 5:00 a.m. tomorrow. The consequences of eating cheese-stuffed jalapeños prior to a 13-hour car trip are best left to the imagination. Just three words: