THE MAYOR OF GILGO BEACH

Lt. Geoffrey Guja worked as part of the New York Fire Department’s 43rd Battalion as a floater between different stations. He had been a New York City firefighter for fifteen years.

Lt. Guja was on light duty at a Brooklyn headquarters on September 11, 2001. He had injured himself recently at a fire and was therefore not required to respond...but when he saw the first plane hit the tower from across the water in Brooklyn, he responded anyway, hopping in a subway car with another lieutenant and dressing up in somebody else’s gear at a firehouse in lower Manhattan. Guja was killed when the towers crumbled. He was 47 years old.

“Everybody had to communicate back and forth with upper authorities,” said his wife Debbie. “But he didn’t have anybody to respond to. He just went over. A lot of guys just went over. It’s their nature.”

Guja had been a registered nurse for about four years, working on a per diem basis at Mercy Hospital in Rockville Centre on the south shore of Long Island. A big, burly, boisterous man, he didn’t look the part of a nurse. He occasionally even poked fun at his image, Debbie said, like the time he stitched half a nurse’s uniform to half a fireman’s uniform for Halloween - even shaving off half his mustache.

Guja would spend summers surfing at Gilgo Beach, one of the many beaches on the thin barrier island that separated the Atlantic Ocean from the Great South Bay. They called him the Mayor of Gilgo Beach, such was his popularity. He kept a 43-foot houseboat there at Gilgo, and every July 4 he would take his wife and stepdaughters, Kelly and Jamie, on a cruise to the Statue of Liberty. He would don a chicken costume for special occasions, such as his daughter’s Sweet 16 party - one month prior to September 11. You had to laugh at the sight of this big guy crammed into a chicken suit, festooned with yellow feathers.

Born in Brooklyn, Geoff grew up in Massapequa with brothers Gary and Howard and sisters Patty and Judy. After graduation from Berner High School, he enrolled at the State University at Binghamton. A resident of Lindenhurst, he worked for LILCO - the Long Island Lighting Company - for fifteen years before becoming a firefighter and got his nurse training while on the job.

His headstone reads, “WHAT A WONDERFUL WORLD.”

Unlike many of my fellow bloggers, I did not sign up for Project 2996, the goal of which was to have each of the 2,996 victims of 9/11 memorialized by at least one Online Journalist...for I did not want to write about a Randomly-Assigned Individual. I chose, instead, to write a memorial to Lt. Geoffrey Guja - because of all the people who lost their lives that evil day, he is (thank God) the only one with whom I have a personal connection.

No, I never knew Geoff. I can’t recall ever meeting him...yet his loss brought the events of 9/11 very close to me, because we had Childhood Geography in common. Geoff and I both lived on Pocahontas Street: our end of the street was on the west side of the local nine-hole golf course, his on the east side. We attended the same high school. His older sister Patty was in my class, and I shared many a schoolroom with his cousin Art, from elementary on up through high school.

And when I read about his life - his achievements, his personality, his courage - I feel a real sense of loss. Not just because he is gone, but because I never got to know him.

Geoff, may your memory be a blessing and comfort to your family. You are one of the true heroes of 9/11. 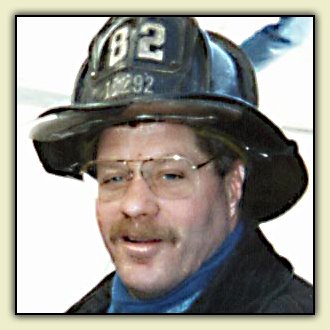 Visit these sites for more information:

Bravest Memorial.com
Posted by Elisson at 9:23 AM