I have been remiss in not putting up a link to the 102nd Carnival of the Recipes. This week’s edition is hosted by Adam at Men in Aprons, which styles itself a Weblog for the Home Chef. Hell, it’s worth checking this carnival out for the photos alone...the recipes are a bonus.

Just keep in mind that sometimes, Men in Aprons have an agenda. 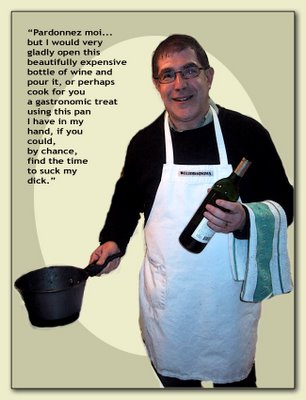 And speaking of “Pardonnez moi,” Elder Daughter has a friend who has started a blog. Or perhaps a Blague.

The site is called “Le Blagueur à Paris,” which, loosely rendered in English, is “The Parisian Prankster.” And it’s probably not coincidence that “blagueur” is pronounced “blogger,” n’est-ce pas?

The author is an American who has been living in Froggy Country for the past couple of years. Content seems to be politics-free, consisting mostly of observations on daily life (la vie quotidienne), culture (la culture), and food (le phude). I figure any blog that contains a post entitled “The Shitpile” just might be worth a look. Go pay a visit, say hello, and tell ’em Elisson sent you.
Posted by Elisson at 3:15 PM