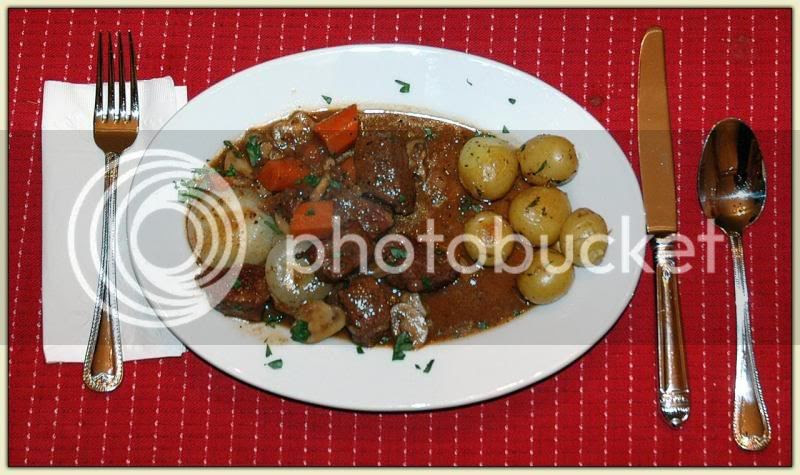 Yummy, meaty Boeuf Bourguignon may be on the menu March 15.

Meryl Yourish reminds us that International EATAPETA (Eat A Tasty Animal for PETA) Day - March 15 - is just over the horizon.

Meryl’s post explains it all, but if you’re simply too lazy to click the link, here’s the deal. We eat animal protein - meat, eggs, milk, fish - on March 15 to thumb our noses at PETA, an organization that gives lip service to the concept of ethical treatment of animals but is really a gang of extremist activist nutjobs that values animals over humans.

Honestly, I don’t know whether to cringe or laugh. It’s not just the offensive ad campaigns and whackjob protests - it’s actions like the PETA effort to rename fish “sea kittens” so as to make them cuter - and thus less desirable as food - in the eyes of the consumer.

I’m going to enjoy animal protein on March 15 - all three squares. Eggs? Why not? Smoked sea kittens fish for breakfast instead of cereal. Maybe a dairy lunch - yogurt or cheese made from exploited cows or sheep. And a honking big steak for dinner, running with hot juices. Or perhaps a plate full of Boeuf Bourguignon, so I can exploit the vineyards along with the stockyards. Any salad or vegetable matter consumed alongside the animal protein will be there purely as accompaniment... or garnish.

What are you going to eat on EATAPETA Day?