IN PRAISE OF ROMANTIC LOVE 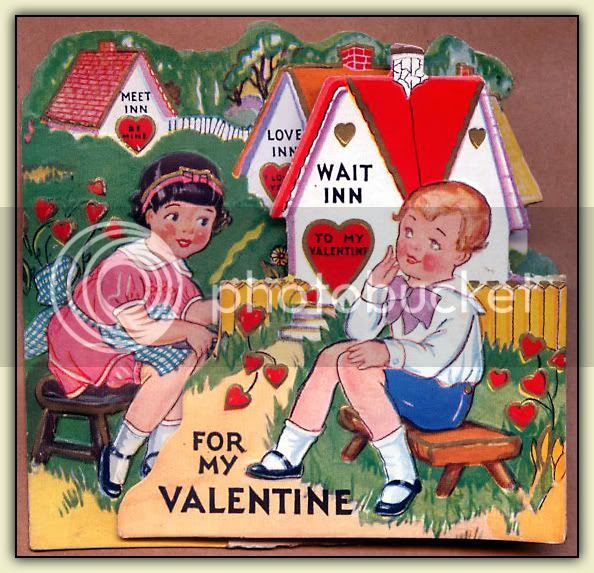 Valentine, circa 1938, from collection of SWMBO’s late Dad.

Because that’s what Saint Valentine’s Day is all about these days, isn’t it?

Sure, we know that the Romans celebrated Lupercalia, their Fertility Holiday, between February 13-15. One can only imagine the goings on, given the complete lack of Judaeo-Christian moral regulation in Rome at the time. Later, February 14 was designated by the early Catholic Church as a day honoring two saints, both named Valentine. Not a rare name for saints, apparently - there was a whole slew of Valentines back then, which makes it seem that “Valentine” may have been the Roman equivalent of “Johnson.” [No, not that kind of Johnson, ya pig.]

Geoffrey Chaucer is credited by some for being the first to associate Saint Valentine’s Day with romantic love, but that’s debatable. It’s pretty clear that by the early 1600’s, however, that link - and the tradition of sending “Valentines” to one’s lovers - was firmly established, at least in England.

All of this got a big shot in the arm in the 1840’s, when the first mass-produced Valentine’s Day greetings appeared in America. Not only did the nascent greeting-card industry jump on the bandwagon, but in the fullness of time, the chocolate folks, the Champagne producers, and the purveyors of hotel accommodations, restaurant meals, and condoms (I made that one up) leaped up as well.

Nowadays, Saint Valentine’s Day has been thoroughly cleansed of any prior pagan or Christian religious associations... which gives us free rein to taste of its heart-shaped fruits. It’s a day that is devoted to the expression of affection, and - dare I say it - Romantic Love. Whether or not it has evolved to this point thanks to the relentless pressure of merchandising - the fate of pretty much every holiday on the American calendar - is immaterial. It is what it is.

And that’s not a bad thing, really.

The Romantic Idealist in me wants to say that with She Who Must Be Obeyed, my true love and Significant Other, every day is a celebration of our romantic love. But we all know that’s bullshit. Look, we’ve been married for approaching 32 years, and there are plenty of days when we just sorta acknowledge each other’s presence with a nod and a grunt.

But there are several days that stand out, days that call out for especial recognition of the loving bond between us. There’s our Engage-A-Versary, February 5, the day on which we agreed to yoke ourselves together. There’s our wedding anniversary, June 12. And, for the Lily-Gilding Impulse, there is Valentine’s Day.

Speaking of which, have I told you about my Valentine?

We met a little over 33 years ago on a blind date. I knew right then she was someone special: Within 24 hours, we had seen Monty Python and the Holy Grail and eaten peanut butter pizza.

We have lived our life’s adventure together in four states and in seven different houses. We have had children - wonderful children - together. We have comforted each other as we mourned terrible losses; we have had times of deep joy.

Every day, whether it be exciting or prosaic, is a good day when we are together. She makes me laugh; she also puts up with my attempts to make her laugh. And at night, as we lie in each other’s arms, I am truly at peace.

She is my SWMBO, and I love her.