I know this is a few days after the fact, but I actually enjoyed watching the Stoopid Bowl this year. It was a real contest and it had moments of genuine excitement, despite my not having a dawg in the hunt. I’m not overmuch a Steelers fan, and I’m still a little pissed at the Cardinals for knocking the Atlanta Falcons out of the playoffs.

Those who know me know that I’m generally not all that excited about the Big Game. Big Food, though... that’s another matter. Steve H. will attest to that.

Imagine my surprise when I discovered this collision between Big Game and Big Food, courtesy of Pat at the Greenville SC Post Card Blog. It’s nothing less than an edible Super Bowl stadium, complete with blimp... constructed entirely out of Snack Foods. Read about it and weep. With terror or pleasure, your call. 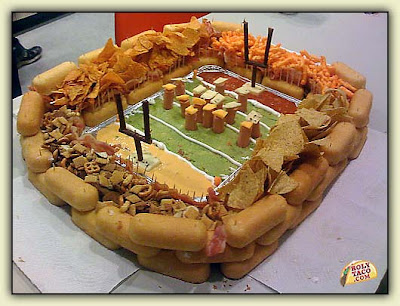 I do believe Pat is schizoid. On the one hand, he is a gentlemanly connoisseur of fine wines and president of the Sommelier Guild of Atlanta, the outfit that puts on those nifty wine tastings that Denny, Houston Steve, and I are so fond of. On the other hand, he posts links to the damndest food-related items on his blog.

It’s Pat that introduced me to the infamous Luther Burger...and a recent post of his links to a site that lists ten Weird Gourmet Foods. [I’ve actually eaten two out of the ten, in case you’re curious.]

I suppose it’s nice to know that a mind that can encompass the finest vintages of France, Italy, and California and that can draw fine distinctions between Merlot and Cabernet Sauvignon can appreciate the glories of a football stadium built out of 58 Twinkies, a pound of bacon, guacamole, queso dip, and salsa, Slim Jims, and Vienna sausages... miscellaneous chips and cheeses... with a summer sausage blimp hovering overhead. Sweet.