It seems that while Houston Steve, Denny, and I were enjoying a Winey Evening a few days ago, veteran New York news anchor Ernie Anastos was busy stepping on his dick.

By now, millions of people have seen the YouTube video clip of Ernie’s bizarre exchange with weatherman Nick Gregory. Entertaining as it is, I’m sure it was much more amusing seen live on WNYW-TV, the New York Fox affiliate.

“I guess it takes a tough man to make a tender forecast, Nick... Keep fucking that chicken.”

Some people - the kind of people that always want to believe the most innocent explanation - think Anastos intended to say “plucking” and was a victim of a slip of the tongue. To which I say “Bullshit.” Ernie knew exactly what he was talking about.

I am convinced that his Perdue chicken reference caused an instantaneous mental flashback... to an old story, a True Story. It is a story I heard from a customer back in the mid-1980’s, about a figure who had become a sort of local legend. I refer to the Chicken Man of Jackson, Tennessee.

It seems this fellow was arrested for having had sexual relations with a chicken. Several chickens, in fact. On the surface, one could be forgiven for considering this to be a Victimless Crime, but nobody asked the chickens... and besides, the happy burghers of Jackson, Tennessee had enacted laws against such behavior, lest the streets of Jackson run riot with Chicken Fuckers.

Strange as this was, stranger still was the fact that he had been turned in by his wife.

It takes a special sort of woman to stand up in court in front of the entire assembled community and finger her husband for being a Chicken Fucker. A confident, self-assured woman. A woman with a “I don’t give a shit” attitude. Because the unavoidable implication is that, given a choice between her schmutschkie and a chicken’s, her husband prefers the chicken’s. Ouch.

Turns out that she didn’t really care at first that he was dickin’ the chickens per se... what sent her over the edge was that he was killing them in the process. Double ouch.

The Chicken Man became a sort of perverse Local Celebrity as a result of all this. Whenever he showed up at a Friday night high school football game, he’d get a standing ovation, with the crowds cheering “Chicken Man!”

Whether it was this old story that inspired Ernie’s outburst Wednesday evening or some random Brain Fart, I think the best part is the look of horror on co-anchor Dari Alexander’s face. In the screen shot below, it almost looks as though her eyes are bugging right out of her face. 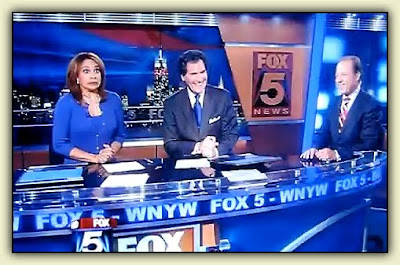 “Holy shit! Did Ernie just say what I thought he said?”