Eli (Hizzownself), with Toni, his Better Half.

Earlier that day, we had driven out east to do a little winery hopping. It seems that Long Island, in the past three decades, has become a mini-hotbed of viniculture: Who knew? About forty wineries dot the various towns on the eastern end of the island, with most on the North Fork... so that is where we headed.

At the Lenz Winery in Peconic, we stopped for a tasting amidst a profusion of carefully manicured vines. Barbara, our charming blonde tasting host, played Long Island Geography with me as she poured our wines - as it happens, she was a year younger than me and had lived in the same town - and on the same street, on the opposite side of the nine-hole golf course that bisected the neighborhood.

SWMBO and I at the Lenz Winery, Peconic.

The wines were good - the North Fork microclimate is particularly suited to Merlot - and SWMBO and I ordered a few bottles before we all went on our merry way. 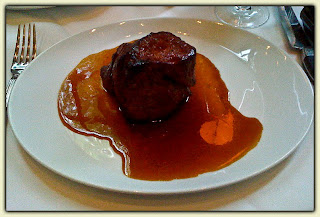 That evening, we enjoyed a fine dinner at Tellers, a chophouse tucked into a vintage bank building in Islip. As impressive as the surroundings were - thirty-foot-high ceilings tend to add a bit of tone - the food and wine were at least as impressive. My filet, a handsome, softball-sized chunk of prime, dry-aged beefmeat, had just the right beefiness and texture; Eli elected to have the braised beef short ribs, a ridiculously flavorsome, tender example of the genre. And the wine, a 2007 Merlot from the South Fork’s Wölffer Estate Vineyards, complemented the meal perfectly.

As we were polishing off our various entrées, we saw a waiter glide past bearing an enormous trencher with what appeared to be Fred Flintstone’s dinner: a huge baseball bat-sized bone with a clublike wad of meat attached to it. What in Gawd’s name was it? According to our waiter, it was the house speciality, a forty ounce (!) bone-in ribeye. Since I have no compunctions about making a fool of myself in front of complete strangers, I got right up and walked over to the table where that monster steak had been delivered... to a guy who looked like he could work as an NFL player or a bar bouncer.

“Excuse me, but that’s a mighty impressive steak. Would you mind if I took a picture of it?”

Somewhat bemused, the fellow allowed me to photograph his meal. Alas, the picture did not turn out well, but I could’ve sworn that piece of meat bore the legend “Callaway FT-iZ.”

There would be more celebrating the next day, complete with cake and The Other Elisson’s homemade blueberry cobbler, but this was a Birthday to Remember.