I submit for your delectation a photograph of the blueberry cobbler prepared by The Other Elisson and served forth on our Daddy’s eighty-fifth birthday alongside gargantuan slabs of layer cake and chunks of melon. 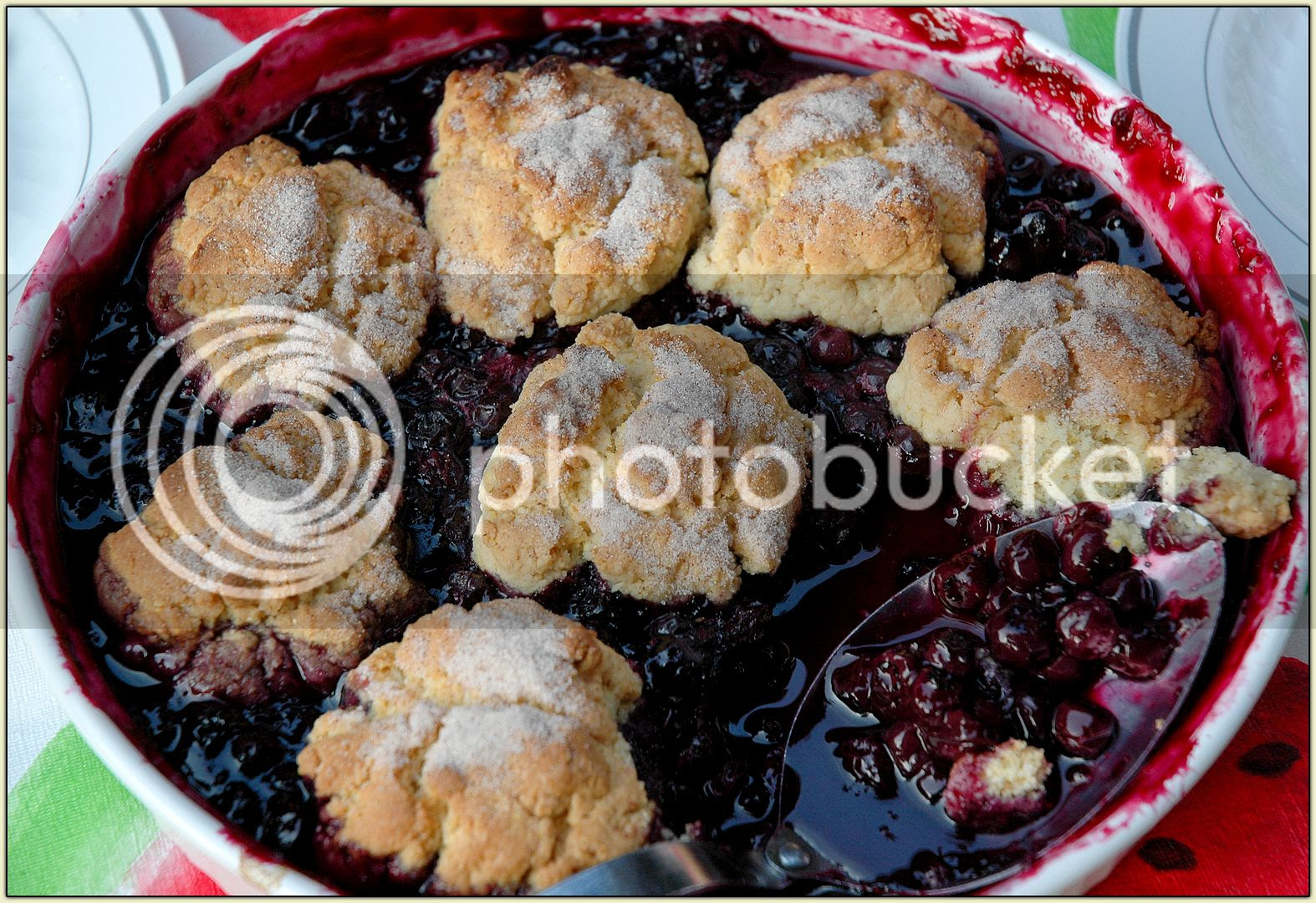 The Other Elisson’s Blueberry Cobbler.

I permitted myself a taste of the berries. They were packed with delicious fruit flavor, enhanced by the one-two punch of lemon and cinnamon. Unbelievable.

People who have been reading this site for several years know that I loves me some blueberries. It was four years ago this week that I was in New Brunswick, Canada - home of some of the finest blueberries in the world - so I know whereof I speak.

Until this bad boy showed up on the table, I had never known my brother was a Dessert Maven. Normally, the Other Elisson lives a fairly ascetic life, being very careful about what he eats. But apparently he’s not ashamed to cut loose now and again.

As for how he did it, I’m pretty sure this is close to the recipe he used. It will serve six to eight... or four really serious cobbler lovers:

The Other Elisson’s Blueberry Cobbler

To make the filling, stir the sugar, cornstarch, cinnamon, and salt together in a large bowl. Add the blueberries and mix gently, using a rubber spatula, until evenly coated; add the lemon zest and juice and combine. Transfer the mixture to a 9-inch glass pie pan. Place the pie pan on a rimmed baking sheet and bake until the filling is hot and bubbling around edges, about 25 minutes.

While the filling is baking, get the biscuit topping ingredients ready but don’t mix the wet and dry ingredients together until just before the berry filling comes out of the oven. Whisk the flour, cornmeal, ¼ cup sugar, baking powder, baking soda, and salt in a large bowl to combine. In a separate, small bowl, whisk the melted butter, buttermilk, and vanilla together. Mix the remaining 2 teaspoons sugar and cinnamon in another small bowl; set aside. Just before the filling is ready, add the wet stuff to the dry stuff and stir until just combined. You don’t want any dry material left, but don’t beat the crap out of it.

Now it’s time to put the cobbler together. Take the berry filling out of the oven and jack up the oven temp to 425°F. Pinch off eight equal-sized globs of biscuit dough and place on hot berry filling, spacing them at least half an inch apart. Sprinkle each dough-glob with the cinnamon sugar mixture you prepared earlier. Stick the whole mess back in the oven and bake until the filling is bubbling like blue lava and the biscuits are golden brown on top - about 15-18 minutes. Remove the cobbler from the oven and cool on a wire rack 20 minutes or so. Serve it forth with lashings of vanilla ice cream or lightly sweetened whipped cream.

And then, loosen your belt. Oof!