THE CONE OF STUPIDITY

To the casual observer, it’s a combination Kitty Scratching Post and Hiding Spot: a hollow conical polyhedron with a hexagonal footprint, covered in skritchable carpet. Matata enjoys sharpening her nails on it, and once in a while she’ll lurk within. 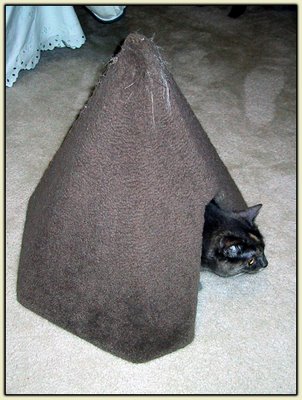 But several years ago, quite by accident, we discovered that the Carpeted Polyhedron had sinister powers.

It was back when we were living in Houston, about ten years ago, that, on the whimsiest of whims, I decided to get a cat’s eye view of the Carpeted Polyhedron. The opening was large enough for me to allow me put my head inside comfortably. When I did so, a strange sense of peaceful relaxation stole over me. I may even have taken a nap.

That evening, Elder Daughter, then a high school student, came home from a night out. As was our custom, she came into our bedroom to greet us before retiring for the night; this allowed us to administer the Parental Kiss ’n’ Sniff Sobriety Test. SWMBO was sound asleep, so I exchanged numerous pleasantries with the (apparently sober and unbaked) E.D. before turning out the lights and sacking out.

The next morning, I got up in Elder Daughter’s grille for having come in after curfew without coming in to our room to say goodnight. The nerve of the kid!

And perhaps I was, for I had - until being reminded - absolutely no recollection of a single iota of the lengthy conversation I had had with Elder Daughter after her arrival home the night before.

It was as if the memory had been sucked right out of me. It was like I had lost a chunk of my cognitive abilities. Was it a stroke? An aneurysm? A Brain-Fart?

It was the Polyhedron.

We figured out that the Polyhedron - which we immediately, if at the sacrifice of geometric accuracy, dubbed the Cone of Stupidity - had sucked the intelligence right out of my head.

It has taken years to recover...and once again, the siren call of the Cone calls unto me... 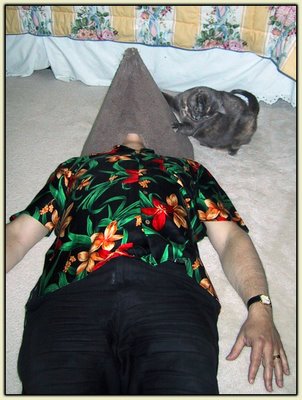 Now, what was it I was writing about?
Posted by Elisson at 8:13 PM