Wow, two movies in one week! And could they be more different?

Let’s take the second one first. Last night, She Who Must Be Obeyed and I joined another couple for a Night at the Weepies. The movie: “The Notebook,” starring Gena Rowlands and a superannuated-looking James Garner, and directed by Rowlands’s son Nick Cassavetes. The venue: the local Cheap-Ass Movie Theatre, where admission for two cost the lordly sum of $3.50. [One time, SWMBO and I went there on a Tuesday evening and were astonished to find that tickets that day are a half-buck each. Holy crap, when was the last time you saw any movie for four bits? How do these guys make any money? Eighty-dollar popcorn?] The verdict: Predictable but remarkably effective sniveler that had all four of us feeling verklempt despite the obvious story line. Garner and Rowlands were excellent, and the image of love in the face of aging and Alzheimer’s was conveyed quite touchingly.

As the film was getting underway, there was a considerable amount of tittering and audible conversation going on amongst a contingent of teenagers on the right side of the auditorium. I leaned over to SWMBO and said, sotto voce, “These damned kids! How do they expect us to get our money’s worth of enjoyment out of this movie?”

That’s the problem with the Cheap-Ass Movie Theatre: you really can’t complain about too much, short of someone setting off a tactical nuclear weapon. It’s not as if you’re paying real money, is it?

Sometimes you don’t mind paying real money to see a flick. Earlier in the week, I took advantage of SWMBO’s being at her Wednesday night class by going to see a completely different kind of movie: “Team America – World Police.” The kind of movie she likely would not enjoy as much as I would. You betcha. 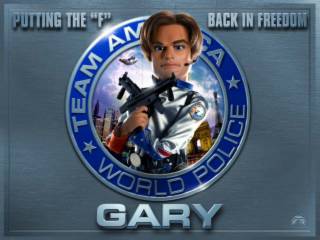 Keeping the world safe from terror - when freedom hangs by a thread!

I actually paid full price to see this one, and I don’t regret it. You need a crude sense of humor to enjoy Matt Parker and Trey Stone’s vision, but I’m well-equipped in that area. This savage satire lampoons just about everything: America’s right-wing save-the-world vision; the cadre of Hollywood left wing celebrities; action movies in general; and Kim Il Jong and Alec Baldwin (my homie!) in particular. All with marionettes, in an updated version of Gerry Anderson’s 1960’s vintage Supermarionation shows. Anyone who remembers “Supercar,” ”Fireball XL-5,” and “Thunderbirds” is familiar with the basic style, but Parker and Stone have brought it into the 21st century by improving the facial expressiveness of the characters…and throwing in liberal amounts of pungent expletives. And let’s not forget nearly two minutes of hot puppet-on-puppet action [which was trimmed so that the movie could avoid the dreaded NC-17 rating]!

Sex - with strings attached. Lotsa shit blowing up. Heaps o’ Vulgar Language. Political incorrectness. I laughed ’til I peed. This one gets the BdE “Thumbs Up.”