No, I have not vanished off the face of the Earth. It just seems like it.

After leaving Austin last Sunday afternoon, I spent the last few days in Sweat City, home of the Great Corporate Salt Mine’s Headquarters. For part of that time, I was at the GCSM’s conference facility a few miles up the road from Houston proper, where I got to take some of the PowerPoints I’ve been pounding out (I am prolific with PowerPoints, podnuh) and present them to da Corporate Peeps.

[All of this done in a state of semi-stupefaction following a Weekend of Debauchery in Austin...but you have probably already had your fill of Blodgemeet Rehash. I still have a passel of pictures, though, which will be posted (subject to me receiving Proper Authorization) in due course.]

Monday night, prior to heading north of town, I visited with Laurence Simon and his charming bride Gina. We stuffed our faces with the good Irish grub at Keneally’s: nachos and pizza. The hell, you say? Nachos? Pizza?

The nachos, I should explain, are Keneally’s speciality: Irish Nachos, made with thin slices of potato instead of the traditional tortilla chip base. The pizza is a thin-crust Tuscan-style pizza – So Thin, You Can Cut Your Wrists With It™ - but Laurence and I Irishize it by ordering it with corned beef.

All of this washed down with lashings of Bass Ale (the bar being temporarily out of Guinness. Hmmm – perhaps the illegal immigrants who carbonate the Guinness were busy boycotting their employer?) And I got an extra special bonus: my choice from the Grab Bag o’ Cat Soaps that Laurence received in the mail from Rahel Jaskow. 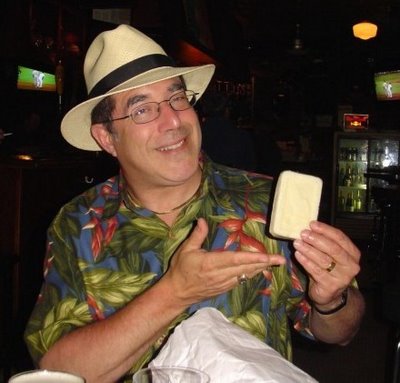 But that was Monday. Fast-forward to Thursday...

Today has been a looong day, what with me driving from the northernmost reaches of the Houston area to Hobby Airport, all the way on the other side of the city, to catch my flight home, then driving from the Atlanta airport to Savannah so as to visit with the Mistress of Sarcasm.

The visit here in Savannah was instigated by the Mistress, who had scored (through the kind offices of her BF Mickey) second-row center seats to a concert by They Might Be Giants, a band both the Mistress and I have been listening to since 1990 – when she was not quite eight years old. TMBG is an offbeat alterna-rock band, with songs that have quirky lyrics or melodic structures. You know a band is a little “different” when their lead singer/keyboardist also plays an accordion...

Both the Mistress and I were pleased that TMBG played a few of their old classics: “Birdhouse In Your Soul,” “Fingertips,” “My Guitar.” But everything they played was excellent, with tight playing and characteristically bizarre stage patter and song intros. These guys are not to be missed.

The opening act, Michael Leviton, was a pleasant surprise. Most opening acts take up stage space and oxygen while the headliner act relaxes in the Green Room. Not this guy. As befits someone who is opening for TMBG, Leviton is unusual. He’s a crooner who accompanies himself on the ukulele as he sings beautifully constructed love songs, songs that are full of clever wordplay as well as a slightly cynical – but never jaded – worldview. I’m getting ready to order his debut CD, My Favorite Place To Drown, based on what I heard tonight.

We still were not done for the evening. Off to look at a few movie posters – the Mistress is appearing in one of the student project films and Mickey is directing yet another one – then off to the Amtrak station in the dead of night where Mickey, the Mistress’s main squeeze, was participating in a film shoot. After an hour of watching shot setups (and two takes), the Mistress and I decided to hang up our spurs.

On the way back to my hotel, I stopped in at La Quinta on Abercorn to say hello to one of my most esteemed of Esteemed Readers, Ivan Shreve, who writes at Thrilling Days of Yesteryear. You will not find anyone more knowledgeable about Old Time Radio – or old movies, for that matter – than Ivan...and I finally got to meet him in the flesh after having exchanged many, many comments and e-mails over the last 20 months or so. Go and pay him a visit – you’ll enjoy it, and you may just learn something new!

Once at my hotel, it was time for a little Salt Mine worky stuff...which is why I am up right now at 4:30 am writing this.

This has been a long day. A loooong day.
Posted by Elisson at 3:53 AM