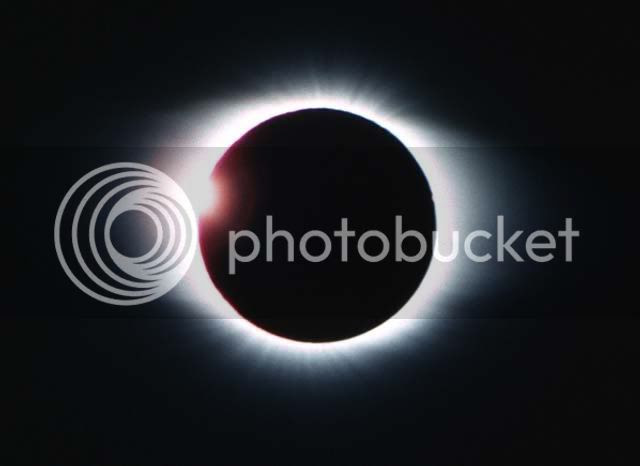 I see that the first total solar eclipse visible in the continental United States since 1979 will take place on Monday, August 21, 2017 - a mere ten years, one month, and one day from now.

The last total solar eclipse visible from the U.S. was in 1991. You had to be in Hawai‘i to see it. Of course, where was Elisson? Running around in New England.

There was a memorable day in late May, 1984 when an annular eclipse was visible from downtown Atlanta. We were living in the Atlanta ’burbs at the time, not too far from the current Chez Elisson, so I made the trek into the city and ended up watching the eclipse from the front lawn of Turner Broadcasting’s campus. It was dramatic, but not nearly as dramatic as a total eclipse would have been: In an annular eclipse, a ring of sunlight is still visible around the Moon’s silhouette, so it never gets completely dark.

A total eclipse is quite another matter. It’s quite probably the most exciting natural phenomenon a human being can see, and its rarity only adds to the excitement.

The total eclipse of August 2017 will be especially exciting for Americans, as it will cut a diagonal swath across the entire mainland of the country, starting in Salem, Oregon and moving into the Atlantic Ocean just north of Charleston, South Carolina.

The best place to see the eclipse? Assuming the weather holds up (blue skies are a necessity!), the best place is probably Eric’s house, which sits right on the centerline of the path of totality.

Sounds like a perfect excuse for a blogmeet, am I right?