SO YOU WANNA BE IN PICTURES

With Hurricane Frances bearing down on Florida’s east coast, millions of people were given orders to evacuate. Many of those people followed those orders and got the hell out of Dodge. That has to be a tough decision – walking away from your property and hoping it will still be there, more or less intact, when you return. But after seeing what Hurricane Andrew did to South Florida in 1992, and after receiving a forcible reminder a couple of weeks ago with Hurricane Charley, most people with a few brain cells to rub together know when it’s time to leave and seek shelter elsewhere. These storms are capable of scouring residential areas right down to the slab, and you do not want to be there when it happens.

As it turns out, my Uncle Phil and Aunt Marge, residents of southeastern Florida, were vacationing in Hilton Head, SC when Frances started its path toward the East Coast. Rather than head home, they simply pointed their car in our direction. Hey, if you’ve got to be a storm refugee, why not wait things out in a comfortable home with family instead of in a crowded high school gymnasium with a bunch of strangers? So that’s the silver lining in this big mess o’ storm clouds – we got a chance to have Phil and Marge come visit.

Phil is my mother’s older brother. My first experience of loss took place when Phil took his family and moved from New York to Florida... right about the same time the Brooklyn Dodgers made their move to Los Angeles: a double whammy! It was a real trauma for me at the time, because I loved my cousins – the move meant that we would see them once a year instead of every week. I can still remember watching their car pull out of our driveway for the last time. I was five years old.

But because our visits became less frequent, they took on the aura of something special... something almost exotic. Our annual weeks-long visit to Florida meant an overnight with my cousins and the chance to sleep in a bunk bed. A bunk bed! As a little kid, I loved bunk beds, probably because sleeping in one was a once-a-year event. Summer camp, and later, college dorm living, would eventually cure me of any nostalgic affection for bunk beds.

So I’d be in one bunk and my cousin Andy in the other. We’d swap stories late into the night. And at some point during our vacation, Phil and Marge would host us and my grandparents for the Passover seder. The special seasonal foods, the sweet, grapey Manischewitz wine, the matzoh... those memories are with me still.

Even the memory of Phil’s dachshund, Rembrandt, who bit the shit out of my kid brother’s hand one seder night. Maybe he didn’t like the brisket.

Years later it was at Phil’s house that I watched the Apollo moon landing. And it was on Phil’s boat, out in Biscayne Bay, that I learned the truth of the proverb, “Jews are a desert people. They should not own boats.” But that’s a story for another blogpost.

Phil used to run a hobby shop, selling chemistry sets, stamps and coins, and what-not. The hobby stuff eventually disappeared as the business mutated into a scientific equipment exporting firm, but I loved that little shop. What kid doesn’t love a hobby shop?

And that’s how Phil made it into the pictures. The comic book pictures.

My uncle had a neighbor back in the 1980’s who worked as an artist for the Archie Comics Group. And one day, Phil showed up as a bit player in a “Sabrina, the Teen-Age Witch” comic book.

The name of the story (from Number 76, the November 1982 issue) was “Professor Pither’s Pill” – an innocent enough title until you realized that the Professor had a lisp. So Archie Comics was not above slipping a little excretory humor into their books... if you looked closely enough.

And in the story, Sabrina her own self goes walking into Phil’s hobby shop and has a brief conversation with him. And, I gotta admit, Bob Bolling (the artist) nailed Phil perfectly. Too bad all this was before Sabrina got popular enough to have her own TV series. 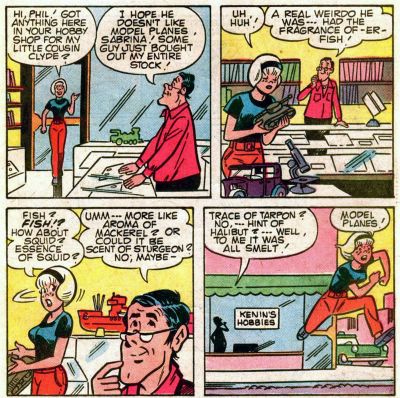 “No actual person is named or delineated in this fiction magazine.” Except maybe this one. 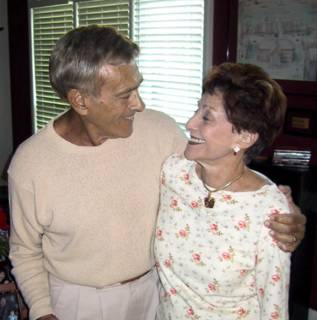 Almost as cool as having your own personal action figure! Harrison Ford, eat your heart out.