Something is fishy in Atlanta…and it just may be the Georgia Aquarium.

The assembled Clan d’Elisson and its various hangers-on spent several of the closing hours of 2005 at this, the newest Tourist Attraction in the city of Atlanta.

I’ve seen a lot of Big-Ass Fish Tanks in the fifty-three odd years that I’ve walked this planet. Visits to Florida in my Snot-Nose Days were never complete without a trip down the Rickenbacker Causeway to Key Biscayne, there to while away a day at the Miami Seaquarium. I’ve pissed away Tourist Bucks at Seaworld, had fancy dinners at the Shedd Aquarium in Chicago. But this…this was something else.

The Georgia Aquarium is touted as being the largest aquarium in the world, with over 100,000 fish and other assorted Marine Fauna representing over 500 different species. It is an Olympic Size Swimming Pool next to which the others are mere blow-up wading pools.

Owing to the need for Morris William and his brood to get on the road for their return trip to Texas, we were only able to stay a few hours, which meant seeing only a few of the multifarious Fishy Attractions. But what we were able to see was Mighty Damned Impressive.

Beluga whales, for one – a tank with several of ’em. As whales go, they’re not Leviathans, but they’re still fairly large animals. Disturbingly human, they looked – almost as though they were men encased in white, waxy, living sarcophagi. Playful, too: one of their favorite games was to exhale a puff of air to make a perfect ring-shaped bubble, which they would then swim up underneath and snap right up. 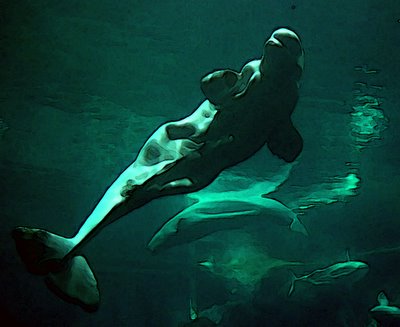 It’s easy to imagine them being intelligent, although without opposable thumbs, a tool-building, mechanized warfare-making, income-tax-driven lifestyle is most likely beyond their capabilities. [Which may mean they’re really intelligent.] Do they enjoy their life in the big tank? Do they have a sense of humor? Do they have enough brain-wattage to think we’re assholes?

Fascinating as these beasts were, I was hoping to see something really impressive. With fishtanks, as with dicks, size matters. Length. Girth. Depth. And the Ocean Voyager exhibit had it all, including a tunnel right through the heart of the tank.

Good Gawd. Whale sharks. Huge-ass fish. These were juveniles – impressively large, yet well short of the 40-foot length they will ultimately attain. As they swam though the tank, they were surrounded by clouds of smaller fish, no doubt under contract to provide essential services: 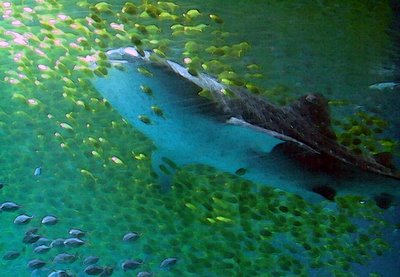 Looking up from the tunnel at the bottom of the tank, you could see a mosaic of manta rays – hundreds of ’em – silhouetted against the firmament, moving along the upper reaches of the water, resembling nothing so much as one of those M. C. Escher lithographs in which repetitive patterns change shape and blend into one another - an eerie underwater tapestry. 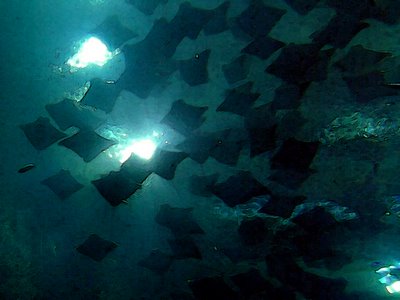 A mosaic of manta rays. 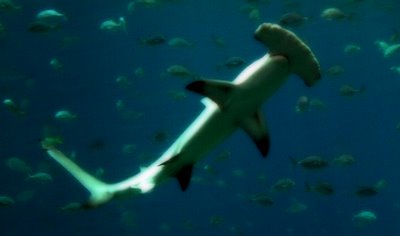 Our little nephew William was goggle-eyed - and so was the rest of our little mob. Seeing Remarkable Things somehow awakens the awestruck kid in each of us, and that Inner Child of mine was bouncing against the walls as if he had had a caffeine enema. We left reluctantly, resolving to come back before too long. Since the Missus and I have purchased annual passes, that shouldn’t be too hard to do.

If you needed an excuse to visit Atlanta, now you have one. Besides the opportunity to be in close proximity to alla them fine Jawja Blodgers, that is.
Posted by Elisson at 6:07 PM