There’s less of me around these days...which is a Good Thing.

Over the past three months, I’ve managed to drop about 10% of my body weight, bringing me down to my lowest body mass in at least ten years. I still have a good ways to go before reaching my goal: another 25 pounds should do it.

Old Uncle Elisson has always had to pay attention to his weight, which tends to balloon northwards when I get into sloppy eating habits. I love red meat, cheese, ice cream, and chocolate-based desserts, all of which have a tendency to convert themselves into Ass-Fat when consumed in immoderate quantities over a long period of time. And as I get older, I find that it’s all too easy to pack on the pounds.

You can ignore ’em for a while, but they have a way of making you take notice.

Some years back, I used to sport Facial Hair. My beard had its uses, chief among them (besides keeping the face warm in winter) being that it served to hide a Multitude of Chins. More chins than the Hong Kong phone book. But after I shaved it off - it was giving me an excessively grizzled appearance - I could no longer hide that burgeoning Neck-Wattle. Ecch.

And I also found that once my weight got to a certain level, I started snoring. Didn’t bother me, but it annoyed the hell out of She Who Must Be Obeyed. And it developed into a full-blown case of sleep apnea, serious enough to be life-threatening. I was tired all the time...because if you have sleep apnea, you never get a good night’s sleep.

Enough of that shit.

No stupid-ass Fad Diets for me. I’m a lifetime Weight Watchers member (and a former instructor), and I’ve learned that what works best is the classic, tried-and-true method: Eat fewer calories than you expend, exercise more, and choose your foods carefully to get the maximum nutritional punch. For me it means more fish and less red meat, and laying off the blue cheese dressing on my salads. Or having one or two slices of pizza instead of four or five. (Staying the hell out of the Godiva shop at the mall helps, too.) It’s a slow process, but it is less vulnerable to the Boomerang Effect. Who wants to take a bunch of weight off, only to put it right back on?

And it’s not all that tough. You’ll notice I haven’t given up my Sommelier Guild dinners. There’s nothing I can’t eat - it’s just a question of amount and frequency.

It’s also a lot easier for me because SWMBO is right there beside me. And man, does she look good.

Being slimmer is a mixed blessing. I feel much better, and I don’t snore as much, which is good. And I can wear my size 34 pants instead of having to squeeze into 36’s (or flirt with 38’s). Hell, there’s a pair of twenty-year-old pants in my closet that I can now get into comfortably. Who gives a shit whether they’re In Style?

But now I have to start getting my suits altered. They’re beginning to hang on me a little.

Even my Favorite Nutty Headgear is starting to feel a bit loose... 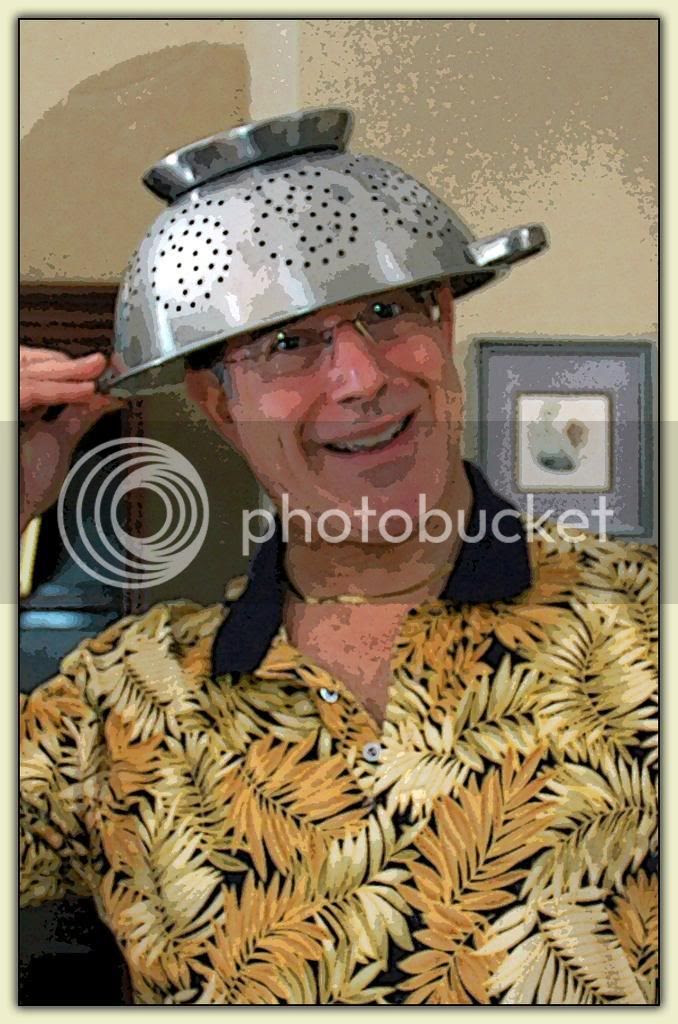 “Does this colander make my head look fat?”